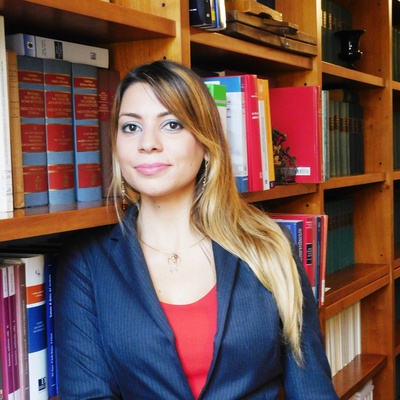 Angela immediately began practicing Law at the Studio HLT, concurrently being accepted to the Specialisation School for Legal Professions at the University of Florence’s Faculty of Law, through which she completed a traineeship at the Court of Florence in the Civil Division.

In 2013, Angela was awarded her Specialisation Diploma from the School, presenting a thesis on the overlap between Administrative Law and Penal Law entitled, “The requirement of a violation of law or regulation in the crime of abuse of power”.

Following came the qualification to practice law (session 2013) and by 2017, Angela was a member of the Florence Bar Association.

Angela mainly works in the fields of Administrative Law and Private Law, with her focus also frequently turning to issues regarding Constitutional Law, in particular for matters pertaining to the allocation of legislative proficiencies from the State - Regions and the protection of particular regionalism.

Having gained specific expertise in public procurement and concessions, she has provided consultation services to various areas and in the extrajudicial field, to both public and private clients of the Studio HLT.

Whilst working in Competition Law generally, she advised members operating in construction, urban planning, transport, and public services in general.

With regards to Private Law, Angela has offered consultation, including on contractual matters and issues pertaining to the discipline and operation of associations and foundations, gaining particular expertise in consumer protection and, more recently, personal data protection, having acted as a consultant to numerous companies on the process of adapting the corporate policy to new regulations on personal data processing.